Beach House in a Cow Pasture 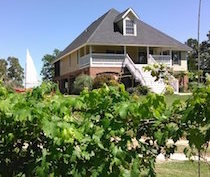 It’s true that I built a beach house in a cow pasture then loaded it up with my things from beaches and boats. I tell anyone that will listen that it’s a tribute to the artist Christo who wrapped islands in fabric, draped a gigantic orange curtain between two mountains, and covered France’s famous Pont Neuf bridge in cloth. In the spirit of beach and lake houses, this strange artwork of mine has even been given a name, “Pineapple Hill,” and that’s what it says on one of the brick columns out by the road.

I may never reach the writing heights of this bunch, but naming my house seemed a good start in that direction.

Here’s an article in Elle Décor magazine about the houses of famous authors.

Here’s an article in Elle Décor magazine about the houses of famous authors.