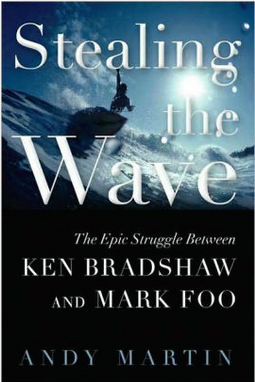 My “beaches to peaches” transition from sailboat to rural South Carolina boonies means I do most of my reading during summer months—in the hot tub—instead of winter months hiding out on the cabin of that sloop.

A while back someone gave me a copy of Stealing the Wave—a must have for beach house or boat or hot tub in a cow pasture (i.e., Pineapple Hill).

Much is said by the sub-title: The Epic Struggle Between Ken Bradshaw and Mark Foo.  For seasoned surfers, it says it all.

If you’re not a seasoned surfer, think “Superman versus Batman.”

These two guys couldn’t get enough of one another in terms of their intense competition to be king of big-wave surfing. Ken Bradshaw was a hot-tempered Texan with fully ripped muscular structure and the jaw of a Great White. He considered himself a keeper of Old Guard traditions.

Foo, on the other hand, was a fast rising up-and comer-from the next generation.

Very quickly they began to butt heads. (On one occasion, Bradshaw took a BITE out of Foo’s board.)

Yet, too, in the spirit of true competitors at the top of their sport, they needed on another to keep motivated, to raise the bar higher and higher.

Finally, at a California surf spot known as Maverick’s, one of them pushed that bar too far.

I still think of them sometimes when the coolest of things happens while under sail—two dolphins swim alongside, surfacing and submerging in tandem, pushing one another to go faster and faster it seems.