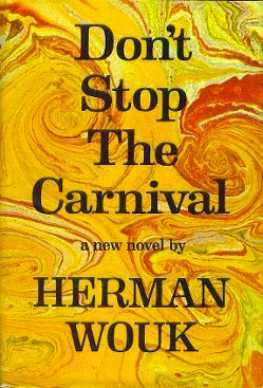 This is one of the two books that have affected me like Salinger’s Catcher In The Rye did Mark David Chapman, John Hinckley and “Jerry” the Mel Gibson character in Conspiracy Theory. I keep buying copies whenever I see them, no matter how many I already have.

Another thing you should know is that Don’t Stop the Carnival is one of Jimmy Buffet’s favorites—he liked it so much he tried turning it into a musical. No doubt he liked it for its setting—on a fictional island in the Caribbean—and its fun blend of characters as one of them, a Broadway press agent, moves down to buy and manage a tropical hotel. (In this sense, it reminds me of A Trip to the Beach, the true story of an American couple that move to Anguilla to open a restaurant.)

What would seem like a heavenly adventure becomes a hellish task as every obstacle possible—from native ways and old plumbing to complicated relationships—is thrown down like an armored gauntlet challenge.

Perhaps if Chapman and Hinckley had read Don’t Stop the Carnival instead of Catcher in the Rye, they’d be running a small bar in Key West instead of…well, you know what happened to them.

This book is said to be loosely based on Herman Wouk’s experiences in managing an actual hotel, the Royal Mail Inn, in the early 1960s in St. Thomas, U.S. Virgin Islands. The hotel was on Hassel Island, located in Charlotte Amalie Harbour.

A “must have” in your Books For The Beach And Boat collection.