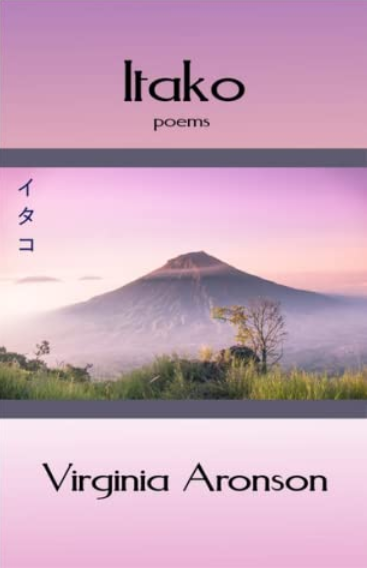 To be a poet, one must keep a poet’s mindset, live in the poetic zone of a poetic, a particular way of sensing and seeing the world around you. There’s a calmness involved. An ability to identify things of special meaning sometimes before and sometimes after deciphering many parts into their simplest meaning and most complex implications at the same time. At least this is my opinion. I have been a poet—or tried to be—but could not sustain the poet’s sensitivity. The world got at me and I gave in to it.

However, all around us are others who keep that special gift going so that through them we can see what we ourselves cannot. They harvest these things like grain is harvested and then they make something from it—bread for the soul. They gather it up like firewood and create flames so that we can see better in the dark. Without poets—and the words they find that we cannot—we would be lost because poems speak truth and truth is always the way back home.

I was recently given Itako, a collection of poems by Virginia Aronson inspired by the Japanese custom of training blind women to communicate with the world of the dead. They are good poems, I think, because they tell us what was there in the lives of these women—lives we need to know and understand because they are far away from where most of us are and because the practice is fading in the glare of modernization.

Of the three quotes Aronson chose to open this collection, the one from Helen Keller stands out most to me. It says, “The only thing worse than being blind is having sight but no vision.” I believe the observation is timely as we of the world struggle to find our path.

In her opening poem, Aronson acknowledges that the Itako way is being let go of even though it still reaches out to us. In “Itako Dying”, she encourages the reader to go to the Itako women even though it will seem uncertain…awkward.

You will blush
shy from her
small hesitant steps
tiny whistling bird
in your uncalloused hand.

You must suffer
sight
not necessary
for seers.


Aronson’s Itako poems follow the life of an Itako woman from the day she is given over to the shamans who will train her, through the lonely harsh conditions of that training, through marriage to a kami (Shinto) spirit guide and then her emergence into the practice.

In the end, Aronson points out the blindness of us all by closing with the lines:

until you flounder
in the density of otherness
lest in a green field
running down endless halls
rockface, jagged and bleak
still locked inside
your crumbling fortress

blind to your own
lack of sight.

You’ll like the smooth cadence—I found it restorative—and the ease with which she leads you into the otherworldly place of Itako.

You’ll also like Aronson’s breadth as a writer. She’s authored, co-authored or ghostwritten more than 40 books ranging from poetry, novels and short fiction to medical and educational texts. I recently enjoyed her novel J’Adoube/South Florida Spin and reviewed it here.

Heading to the beach today. Grab something by Virginia Aronson and cool your toes in wet sand.