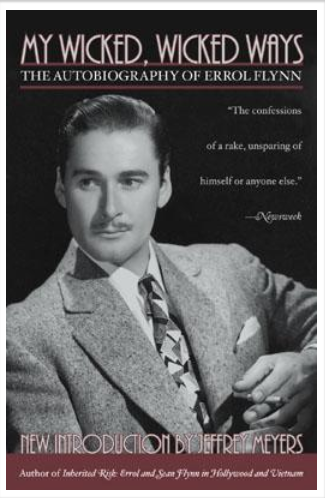 What draws me to Errol Flynn was not so much his swashbuckling movie roles but rather his adventurous life before and during his wealth and fame. Especially I liked his affinity for sailing wooden yachts across big seas and his attachment to the island of Jamaica.

The closest I ever got to him was the place at Snell Island in St. Petersburg, Florida, where his yacht supposedly burned to the waterline. It was often pointed out to me as was the bar where Jack Kerouac hung out. It turned out the two were connected—I’m told Kerouac and other Beat Poets partied with Flynn when he was docked in Paris toward the end of his life and the height of his alcoholism.

Some say the sailboat that burned at Snell Island—not far from Babe Ruth’s winter home (currently for sale)—wasn’t Flynn’s famous Tonga. There’s some dialogue about that at a popular Errol Flynn blog. If his boat was really in St. Pete, I missed it by twenty years. Regardless, his notoriety as a sailing, partying Hollywood celebrity—and owner of a lovely 1938 Alden Sirocco—makes him an interesting shiny thing in my eyes.

In a book about modern Jamaica called The Dead Yard, I read about Flynn’s home in Jamaica. There’s a good article about it in Vanity Fair here.

Flynn’s been on my radar screen for quite a while. But not until I read his autobiography My Wicked Wicked Ways had I ever heard about his “dagging hoggets” experience—biting the balls off six-month old lambs while in his twenties in Australia (and down on his luck). You’ll find it on page 112.

Okay so this is actually more of an essay about Flynn and me and not so much a book report. Sorry. More on writing a book review later but for now My Wicked Wicked Ways has been a much needed break from reconstructing a lost manuscript—a novel I thought was finished until I accidentally saved the wrong draft. Talk about heartbreak. Talk about an awful way to spend the summer. Talk about feeling better about it after Flynn’s dagging hoggets story. Thanks to Flynn, despite losing hundreds of pages of work, I still consider myself a very lucky man.

One last bit about Errol Flynn. He was buried with six bottles of bourbon and his last words are said to have been, “I’ve had a hell of a lot of fun and I’ve enjoyed every minute of it.”