BOOK REVIEW: The Right Side of the River by Roger Pinckney 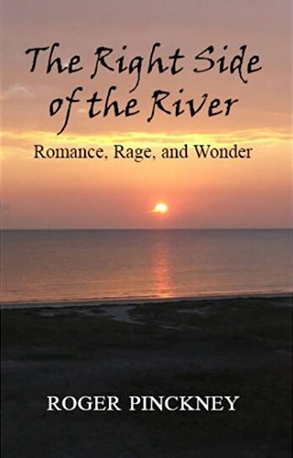 It’s hot tub season at Pineapple Hill, the time of year when working in the little vineyard and garden beds eventually drives me into the healing waters with a Cuba Libre in one hand and something to read in the other. Out here in the South Carolina boonies we have many shelves with many books. Almost all have been with me in the water. If not in the hot tub, in the blue rubber pool (setting for my first published novel). If not in the pool, on the sailboat. Or in the hammock up on the screen porch overlooking occasional deer or coyote, the neighbor’s wayward cow, or a flock of turkeys we’ve collectively named the Wilsons as in, “Look babe! The Wilsons are back.”

More than few of our books show proof of their time in the tub: water splotches or tanning oil smudges mainly, but some are puffed out to twice their original size from taking a dunk on account of that rum. But not Roger Pinckney’s book, The Right Side of the River, about his growing up on Daufuskie, a small island off Hilton Head, then returning later to stay. This book is almost good as new. I read it all the way through before the rum got to me. There was no dozing off then waking later with lime wedges bobbing nearby. I can’t say the same for many of the books on our shelves at Pineapple Hill.

Like Roger, I spent part of my boyhood in the Palmetto State, moved away and then returned. I wonder if that freshens the lens through which we see her now. Because she is wonderful. No matter how far and how long, South Carolina kept her hold on me. Many times passing through on I-95, I woke in the night feeling her around me. It happened as a teenager on family trips to the beach from Chicago. It happened as an adult, asleep in the passenger seat, on trips north from Florida. Maybe having been away makes people see things in a place that others can’t.

Roger has an acute appreciation of the things of the world that I love most: islands, beaches, boats, murky swamps and even murkier legends, family names long removed from their original wealth and prestige, porch swings that squeak when breezes blow in from a graveyard, muck and pluff mud, oysters, big moons over still water, sudden storms, the shadows of deer at night, whiskey, pirates, arrowheads, waves nearly pounding the boat apart, haints, old people that still will love and you still scold you, palm trees, sea turtles, dunes, stuff floating in and out on the tide, the way land smells when there’s no wind and the way it smells right after a hard rain.

His stories are written with an irreplaceable truth—the kind of truth bulldozers keep scraping away at to make room for yet another damned golf course, Pickney might say. Without this truth, you will never fully know South Carolina, especially her Low Country islands, the kind without bridges where full-timers can tell by the feel of the sky if the day is for shrimping or fixing a roof. Evicting a raccoon from the attic or sitting alone on the beach with a six-pack. Or doing nothing. Nothing at all. Which is, on Daufuskie, still a thing worth doing.

I have my own stories of Daufuskie but could have happened on almost any island. For instance, I once went shopping for appliance parts at Daufuskie’s famous “Wal-Mart”—a dumpster, actually—because islanders will do anything to avoid a trip to back to the mainland, meaning Hilton Head or Bluffton. On early Daufuskie mornings, I’ve seen golf carts abandoned in the night—batteries dead—from Freeport to Bloody Point and the sandy tracks in between by outsiders in for a wedding. I’ve depended on Spanish moss to show the way on nights so blind there’s a name for it: Daufuskie Dark. But like I said these could have happened other places whereas Roger’s tales sprout from the roots he has there, deep ones planted generations ago. His stories have back stories and that’s the best kind. His stories know about the local squabbles—he has the dirt on the dirt—and where the wild hogs are and where the secret bones are buried.

He’s written other books too and I’ll be reading them in Pineapple Hill’s old hot tub or in the hammock up on the screened porch. Because the South and Southern things make me feel  most at home.