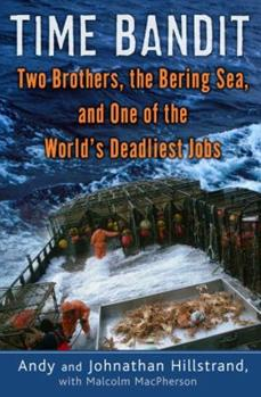 I just got out of the hammock on the upstairs porch at Pineapple Hill having finished Time Bandit, the memoir of brothers Andy and Johnathan Hillstrand whose fishing vessel of the same name has taken them out into the Bering Sea and back. Out there, they brave ice floes and heaving 60-foot waves, gusting winds of 80 miles per hour, unwieldy and unpredictable half-ton steel crab traps, and an injury rate of almost 100-percent in search of the deadliest catch: Alaskan king crabs and opilio crabs.

What makes Time Bandit especially fun is that these two guys were waaaaaaaay crazy long before they came to own that famous boat of theirs. As young boys they went camping—sleeping by the shore eating crows (which, for all I know, may be the tastiest thing in the world, I’ve never tried it)—while at their feet were a type of mussel deemed tastiest in the world (but they didn’t know, having never tried it).

I think my favorite story was from their childhood was the time a friend decided to become an astronaut by climbing into a metal garbage can while the two brothers lit the odd collection of combustible fluids and explosives underneath. Later, there were way-too-ambitious attempts to jump motorcycles over things—resulting in so many hospital trips that the doctor told their mother she’d save a fortune learning to do stitches herself.

And not much changed as they got older.

When not taking on near death experiences at sea, they faced them on land as well. Time Bandit describes lots of great brawls including the time one of Jonathan’s hot girlfriends got her faced slammed into the bar counter by a biker, resulting in the biker being given a three-day coma by Jonathan.

I’ll take along my copy of Time Bandit next time I’m fishing for Nessie at the Jonesville Reservoir.

Whatever you’re fishing for, be sure to bring yours.