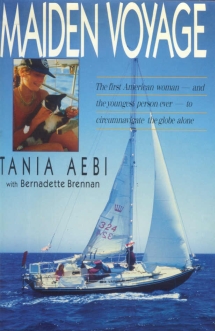 For some reason, today my eyes fell upon a “like new” copy of Maiden Voyage by Tania Aebi. It has somehow avoided the awful fates many of my book have endure –sliding off a sailboat bench into water gathered at the cockpit drain, slipping from my sleeping hands into the pool, getting slathered in suntan lotion at the beach.

Tania Aebi is the first women and youngest person to circumnavigate the globe alone –it had been a challenge offered by her father (an artist): College or sailing solo. As an 18-year-old drop out (“bicycle messenger in New York by day, a lower East Side barfly at night”) at the time, it was pretty much an offer she couldn’t refuse.

Maiden Voyage is a fine sailing tale that also describes the story of a young adult finding herself; finding “rails” (as I like to say), a path and destiny. Being transformed by her experiences into something much larger. I’ve given a copy to each of my nieces. Now I’ll support it further with a book review.

She enjoyed beautiful places and endured terrible hardships (including a collision with a tanker and a terrifying lightening storm off Gibraltar)  –the good and bad stuff of life underway—however (and this may reveal an unpolished truth about myself) my favorite part was her decision to go into Colón, Panama, despite having just been told of people’s fingers being cut off for rings, men being forced to surrender their shorts, of individuals being threatened with knives, and of chains being ripped from around necks.

To that danger, Tania said something along the lines of “I’m from New York City. How violent can it be compared to that?”

A lot of people wouldn’t have accepted the challenge to sail around the globe alone. Even fewer would have gone into Colón.