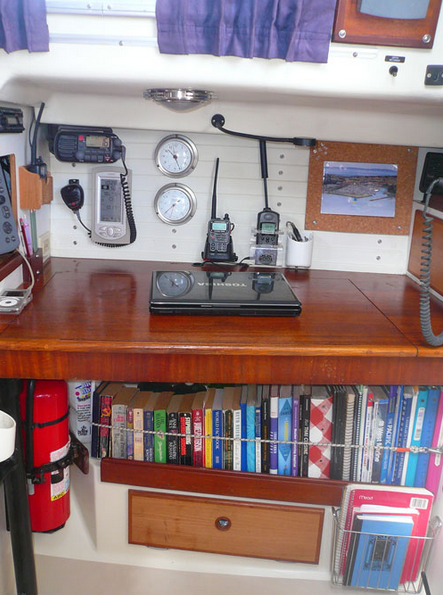 This morning’s coffee time writing session is about books to take sailing but of course I have to yammer awhile before getting to specifics.

My sailing buddies know the duffle bag I toss aboard will have one swim suit, a faded red one that says “Lifeguard,” a couple of shirts, a pair of fingerless gloves for pulling lines taunt around the winches, a red hat with a frayed brim from the 1998 Outback race, and a pair of sturdy deck shoes to protect my almost always broken pinky toe in addition to the worn out flip-flop-style sandals I wear around Pineapple Hill

They know there will also be bandages, a suture kit, and antiseptic.

In fact, my onboard injuries are still cited in whispers among certain crew at certain marinas.

In addition to basic cuts, bruises and sprains, my credentials include a blown out knee, the near loss of a finger, and a head on collision with the boom that I’m told much resembled a baseball bat bashing an over ripe melon.

But beyond this, I’m also known for the books I bring along.

My formula for packing goes something like this: Start with half as many clothes as medical supplies then add twice as many books as both.

It’s a small bag, mind you, and rum and limes aren’t included in the math.

On one occasion it may be a book about Irish folklore, one on building decks, a Michener or John Irving novel, and a collection of trivial factoids.

Or there might be a Spanish dictionary, an anthology of short stories, and a new release from one of my writing buddies.

Definitely count on a book of poetry in the mix. Not the rhyming kind. The other. “The work of geniuses,” I say.

Still, the crew will bust my chops as I step aboard. Instead of “Hey Mate!” or “Wassup?” one of them will say “Here he is lads!” and another will add “I’ve got a poem for ya!” and then recite a randy limerick.

Were it not for my plethora of scars and x-rays, I doubt they’d take me seriously.

By day three, however, they’re bored enough or relaxed enough to want a peek at what I’ve brought.

Especially the poetry. Because poetry can be consumed in the time it takes to poop. Poetry doesn’t require a huge investment of time. The pay off—or lack of—can be determined in minutes, not hours. I get their reviews right away.

The guys I sail with regularly have been around me enough to at least give these books a shot. I’ve gone below during swaggering, mechanical bull-style bouts of bad weather to find one fellow or another taking a crack at Theroux’s The Old Patagonian Express, Gabriel Garcia Marquez’s One Hundred Years of Solitude, or Hemingway’s Island in the Stream.

Last time out, someone got to my Our Man in Havana by Graham Greene before I’d had a chance to finish.

Every so often a “newbie” will have to be indoctrinated to reading under sail. When one of them makes a crack about poetry, I toss him Charles Bukowski’s Burning In Water Drowning In Flame. Bukowski’s poems are rough—feral. Then I’ll get busy with a winch and come back to find the guy telling someone else about what Bukowski’s said in poems like “Dogfight” or “Shot of red eye.”

Next thing you know, he won’t give back Bukowski unless I trade him for John Berryman’s 77 Dream Songs where Berryman hides behind Henry, an alter ego we’re led to believe is a cat. Henry and Henry’s friend “Mr. Bones” (aka Death) follow Berryman through all of his depression and loves and losses. Basically, it’s the poetry of a playboy whose well educated mind had been festering for years. Even if they bail on Barryman, most will appreciate the way the man died. A dapper dresser, he strolled across NYC’s Washington Bridge, tipped his hat to a lady, then jumped. So the story goes. “That fellow had real metal,” one of the guys will say.

The deep thinkers aboard may go from there to Gary Snyder because, as one said, “If you’re into martial arts, you like him. He’s very “Zen”.

Or Bly. “He’s like Snyder but wears heavy wool sweaters.”

Or Plath. “That lady had daddy issues.”

One or two may press on to Ginsberg at least as far as his poem The Howl which begins with the line “I saw the best minds of my generation destroyed by madness” then goes on for pages and pages backing up that claim.

Just about everybody takes a look at William Carlos Williams because his poems tend to be just a few words wide. Less intimidating, visually at least. Most will read his poem “The Yachts” …or, this one, one of my favorites, a note to his wife:

This Is Just To Say
by William Carlos Williams

I have eaten
the plums
that were in
the icebox

and which
you were probably
saving
for breakfast

Forgive me
they were delicious
so sweet and so cold.

William Carlos Williams had class—I usually just write “Sorry” on a Post-It note and leave it by the fruit bowl.

If only I had a dollar for every time I was bleeding while one of my sailing buds went looking for Chapman’s Quick Reference First Aid Guide For Onboard Medical Emergencies but came back with a Billy Collins’s book of poems such as Sailing Alone Around The Room. Or, once, What I Did For Love in Mickey J. Corrigan’s chick lit series.

Anyway, if you ever want water-logged ideas on what to read on the boat or at the beach, poke around here at Armadillo Island. Goodreads.com is a good place too.