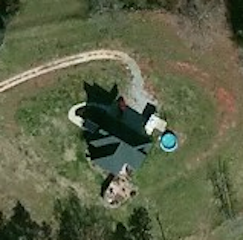 I took a break from sailing to build Pineapple Hill, the beach house in a cow pasture. During that time it was hot and I was yearning to cool off in the ocean or a lake or even a swimming pool. The town reservoir was just a short drive through the woods behind my bottom pasture but I couldn’t relax despite a swim noodle and two cold beers. I kept seeing squiggles on the surface of the water. What ARE those things! I wondered. They made me nervous.

As well they should have because the reason I never saw any other swimmers in that water was because it was filled with poisonous snakes. Important information, for sure, but I was new to the area and nobody filled me in.

A hot tub was in the plan but that came later. In the meantime, I’d seen these big ugly inverted blue mushroom pools made out of rubber. That’ll work. It only cost two hundred dollars at Big Lots and it came with everything (pump, filter, ladder) except the water. Right about then is when a thousand things went wrong in my life and, long story made short, I went into that pool with a Cuba Libre every morning. Early.

The book was accepted by a small traditional publisher but she went blind in the days leading up to its launch. Reviews were good. Sales weren’t.